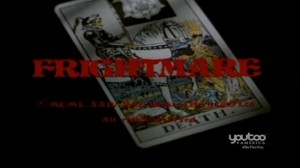 Ivonna Cadaver welcomes you to another spooky edition of Macabre Theatre from her private dungeon. Tonight's feature is the 1974 British horror film "Frightmare." Produced and directed by Peter Walker and written by David McGillivray, the film stars Rupert Davies and Sheila Keith as Edmund and Dorothy Yates who have recently been released from a mental asylum. Dorothy secretly lures lonely young people to her home, promising tea and a tarot card readings, but their fate takes a chilling turn once inside. Highly recommended for horror fans, Rotten Tomatoes calls it "A creepy, entertaining bloodbath."