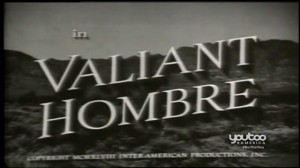 The Cisco Kid (Duncan Renaldo) and Pancho (Leo Carrillo) find a dog, Daisy (played by Daisy), grieving for its lost master. Cisco senses a plot when he later learns that the missing man, Paul Mason (John James), recently discovered a gold lode in the nearby hills. The trail leads to the owner of a gambling hall, Lon Lansdell (John Litel). Linda Mason (Barbara Billingsley), searching for her lost brother, is met when she arrives by Cisco, who tries to hell her the true story as he sees it, but she prefers to believe Landell's version of her brother's disappearance. Lansdell leads Linda to her brother, and she is used in an attempt to make Mason disclose the location of his gold strike. But Cisco and Pancho are close by.